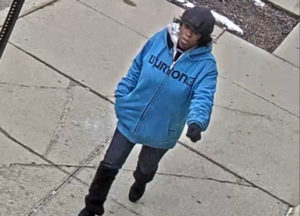 Dubuque Police are looking for this person, accused of passing a counterfeit $20 bill on December 15.

Dubuque Police have encountered a lot of counterfeit cash this year.

Police have released a surveillance photo of a suspect in the city’s latest case. The woman approached a man asking if he had change for a $20 bill so she could plug a parking meter.

The man provided change, but later realized he was handed a fake bill. So far this year, Dubuque Police say they’ve handled 90 cases of counterfeit transactions, with a total of nearly $9,000 being passed.

Officers have made some arrests and filed forgery charges and promise there are more to come.