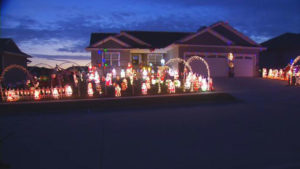 An eastern Iowa resident altered his extensive holiday display this week after a warning from the city.

Josh Covert of North Liberty covers his lawn and house with hundreds of decorations. City officials threatened hundreds-of-dollars in fines because some of his decorations stretched onto city property.

Covert told KCRG-TV, while he’s upset with the city’s stance, he decided to move some of the Christmas decor.

“While it was heartbreaking and disappointing, I guess I caved in to what they wanted,” Covert said. The problem? Lighted arches that covered a sidewalk. Covert moved the arches back a few feet, to avoid a $750 fine from the city.

“I think they’re being a bit over dramatic,” Covert said. Covert claims he never had issues with the holiday display in the past.

“I didn’t have as much as I do now, but I did have the arches across the sidewalk and there were no issues last year,” Covert told KCRG-TV. According to the City of North Liberty, property owners are required to keep landscaping, signs and decorations out of the public right of way. That rule is designed to allow city workers to easily clear snow and respond to emergency situations.

Covert hopes to work with the city next year to put the arches back over the sidewalks. “I get they have a job to do, but I think there’s always room for exceptions,” Covert said. Either way, Covert plans to continue putting up the massive display every December. This year, Covert took in about 100 Santas from a couple in Coralville. That couple had a similar display at their home – but decided not to do it anymore. And Covert didn’t want to see that tradition stop, so he decided to bring it to North Liberty.