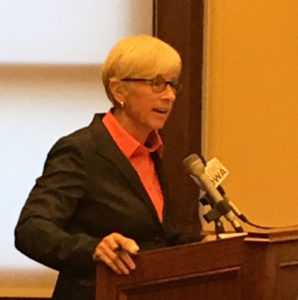 The Iowa Law Enforcement Academy trained a record number of officers this past year.

ILEA director Judy Bradshaw says it’s primarily because there are a growing number of job openings in Iowa police and sheriffs departments. There’s “a wave of retirements” as well as officers making an early exit from the profession, according to Bradshaw.

“As we look at the trends in law enforcement, I think that a lot of this generation are getting into law enforcement and at the seven-to-eight-to-10-year time period, we’re finding that they’re leaving the procession,” Bradshaw says.

Bradshaw has worked in law enforcement for nearly four decades. She started in 1980 as a Des Moines Police Department Cadet and retired in mid-2014 as the department’s chief. In mid-2015, Bradshaw became director of the Iowa Law Enforcement Academy. She says there are still enough candidates taking the training required to fill officer slots in Iowa.

“There are still a number of folks who are interested in this as a profession,” Bradshaw says, “and that’s why part of our training is to address the resilience and how do I not just survive within my career, but how do I thrive in my law enforcement career and that’s where the Blue Courage, we think, is valuable.”

Blue Courage is the name of the academy’s new, 40-hour-long course. It’s available to new recruits as well as law enforcement veterans.

“First of all, talking about what the job will do to you, potentially, and we don’t do that in our training normally with the brand new hires,” Bradshaw says. “(We) sort of map out the things that will happen over time — the burn-out and how do you recognize burnout and what are the signs of that kind of anguish.”

Bradshaw says the class helps officers better recognize when they need to ask for help.

During the last state fiscal year, more than 9,000 sworn officers took classes at the Iowa Law Enforcement Academy. About 300 recruits graduated from the academy during that 12-month period.