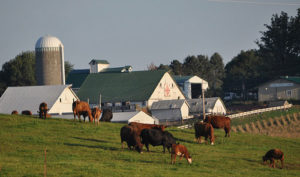 New research documents a decline in U.S. farmland over the past 30 years. John Piotti, president of American Farmland Trust, says his organization collected data in partnership with the USDA and the Conservation Science Partnership.

According to Piotti, farmland is disappearing at an alarming rate. “Since 1982, 41 million acres — that averages out to about 100 acres every hour,” Piotti says.

Piotti hopes the data will help leaders in the ag industry make needed changes to keep farmland in production. Farmers should also be able to improve their bottom line by using state-by-state data that will be released in January.

“It will help farmers make smarter decisions about the future,” Piotti says. “We’re not only going to look at what has happened, so you know for instance as a farmer, if you were in the wave of development that might push you out of farming.”

Piotti says the data also dives into the future of agriculture, in light of climate change. “We’ll have a better sense on how a piece of farm land will fare if precipitation changes or if a number of degree growing days changes,” Piotti says.