You are here: Home / Sports / Iowa and Boston College set to collide in chilly Yankee Stadium 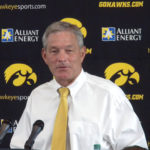 Weather could be a factor on Wednesday when Iowa plays Boston College in the Pinstripe Bowl in Yankee Stadium. The forecast calls for a temperature of 25 degrees at kickoff with a wind chill making it fell like it is 14.

“We have been outside the last couple of weeks”, said Iowa coach Kirk Ferentz. “I feel like we are in the midwest and Big Ten football. You just kind of put that out of your mind and just worry about the game.”

Iowa will be out to halt a dreadful run in post season games. The Hawkeyes have lost five straight bowl games and the average margin of defeat is just short of three touchdowns.

“It’s big for us”, said senior guard Sean Welsh. “It has been a team goal for us for two years to win a bowl game. For us seniors we have been to four bowl games and have not gotten the result we wanted. I think it is time to push it through.”

A key will be slowing down a Boston College running game that averaged nearly 300 yards per game over the final month of the season. Eagles 240 pound freshman A.J. Dillon has rushed for more than 1400 yards. Both teams are 7-5.