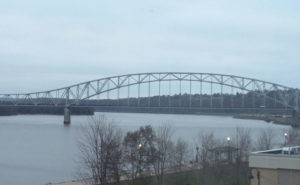 Dubuque is launching a pair of new videos about the city and its relationship with the Mississippi River.

Volumes One and Two of “River Boats, River Voices” will be shown on CityChannel Dubuque this weekend. Cable TV coordinator Craig Nowack says he used new and old video of the river, then added interviews with 11 people who worked on the river and talked about their jobs.

“The voices, as I call them, just did a great job of talking about what it’s like to be on these boats,” Nowack says. “A lot of them work 30 days on, 30 days off. That’s kind of a tough work schedule for family life but they talk very honestly about that, what it’s like to bring a tow boat into a lock and how that all works.” Nowack began working on the videos last summer and explains his motivations.

Nowack says, “People that live along the river are very familiar with the boats and the fact that they go by but they don’t realize all that goes into life on those boats, how it’s a lilttle closed society and they’re not part of any other society other than the nine people that are working on that boat at the time.”

The videos debuted on Christmas Day and will be shown again on New Year’s Eve. They’re also on the city’s website. For previous Christmases, Nowack and CityChannel Dubuque have featured a compilation of local marching bands, and a video road trip along city streets. One year, the video showed birds at local feeders in the tri-state area. At least two people bought copies because they said their cats enjoyed watching it.