You are here: Home / Health / Medicine / ‘Sensory-friendly’ shows make live theater accessible for those with autism 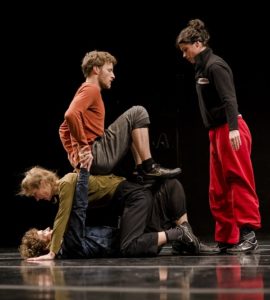 “Tetris” is one of the upcoming shows in the special series.

A central Iowa entertainment venue plans to offer what are called “sensory-friendly” performances in 2018, shows that are geared towards those on the autism spectrum and people with other sensory sensitivities — and their families.

Eric Olmscheid, director of programming and education at Des Moines Performing Arts, says the shows will contain all the joy of a typical theater setting, with a few adjustments.

“We want to create a safe space for young people on the spectrum to come to the theater, often a space that is intimidating or a little out of the norm for somebody on the autism spectrum,” Olmscheid says. “These performances are designed specifically for those young people.”

Autism rates are rapidly rising in Iowa and in the U.S., Olmscheid says, so the Civic Center of Des Moines and the nearby Temple Theater will begin catering to those audiences in the new year.

The productions will be focused on making alterations to all extremes, including darkness and bright lights.

“We leave the house lights up a little bit and any quick flashes or strobing lights are reduced,” Olmscheid says, “things that might set a trigger for anybody and specifically those on the spectrum.”

There will also be changes made to all of the sounds the audience hears, to eliminate especially loud and surprising noises, music and dialogue.

“We’ll have some calming stations in the lobby, some activity stations, so people can step out during the performance if they need to refocus themselves,” Olmscheid says. “We offer some bean bag seating and other non-traditional theater seating to be comfortable and much more attune to how young people might best choose that performance option.”

Families who don’t require these accommodations are still welcome to attend the shows, which include: “Air Play” in February, “Shh! We Have a Plan” in March and “Tetris” in May.