You are here: Home / Sports / Big second half lifts Iowa by Boston College 27-20 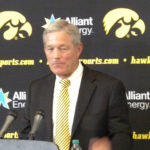 Iowa’s losing streak in bowl games is over at five. The Hawkeyes outscored Boston College 17-3 in the second half in a 27-20 win in the Pinstripe Bowl. Drake Kulick’s one yard touchdown plunge with 3:09 remaining proved to be the game winner as the Hawkeyes closed the season with a record of 8-5.

Iowa won despite being outgained 383 yards to 200 and special teams and turnovers were the reason. The Hawkeyes turned three Boston College turnovers into 10 points and two long kickoff returns by Akrum Wadley were responsible for two other scores.

“The game in a lot of ways was reflective of our season”, said Iowa coach Kirk Ferentz. “I could not be prouder of our team in the second half. They played tough and gritty football.”

Boston College dominated the first half and led 17-10 but the Eagles could not overcome two second half turnovers.

“If you said if you are going to go into a game and hold a team to 200 yards of offense you would like your chances”, said Boston College coach Steve Addazio. “But the turnovers came back and haunted us. Plain and simple. ”

With 283 all-purpose yards Wadley was named the MVP and the win for Ferentz was his 143rd. He is now tied with Hayden Fry as Iowa’s all-time leader in wins.