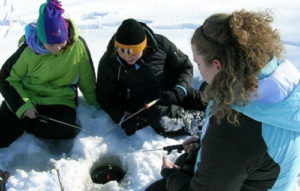 While the temperatures have dropped to below freezing across the state, the Iowa Department of Natural Resources is warning those who enjoy ice fishing to be extra careful during the next few days.

DNR Fisheries Chief Joe Larscheid says the cold snap likely froze most bodies of water solid — but you should still test it before venturing out.

“We need a good solid 4 to 6 inches of clear ice, hard ice in order to be safe,” he says. Larscheid says even with that said — ice is never 100 percent safe.

“In that lake that is mostly safe there could be weak points that you don’t even know about,” Larscheid says, “there’s upwelling there’s currents in the lake, so you’ve always got to be careful when you’re ice fishing.” Larscheid suggests you go to a place where there are other anglers. That’s often where the fish are and if you happen to fall in, there’s someone there to help.

He suggests that you always  fish with someone else so you have help if you would fall in. And don’t delay if the worst happens. “Call 911 immediately and then hopefully you have rope or somebody has rope and you can toss that rope to them, and hopefully they get ahold of that rope and you can pull them out,” Larscheid says. “But I would immediately call 911 because time is very significant in those situations.”

Larscheid says heavy winter clothing often makes it harder to swim or stay afloat if you fall into the water. He says to not panic, as most people are able to use their fingers, arms and legs for several minutes before hypothermia sets in.