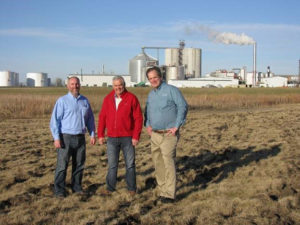 The Iowa Renewable Fuels Association (IRFA) is partnering with the Iowa Monarch Conservation Consortium on a project to create habitat for butterflies. IRFA spokesperson Cassidy Walter, says they are calling it the Monarch Fueling Station Project.

“Biodiesel and ethanol plants across the state have — because of different safety regulations and things — a lot of green space on site,” Walter explains. “And right now traditionally that space is grass. And with this project we are going to be working with those plants to convert some of that green space into Monarch habitat.”

First Gentleman, Kevin Reynolds is the habitat coordinator for the project and will assist biofuels producers in the best practices to convert grassy areas to grow milkweed plants and other wildflowers that support the monarch population. Reynolds had worked at a conservationist for 36 years with the U.S. Department of Agriculture.

Walter says they are starting with a plant in Nevada. She says the Lincolnway Energy plant is the first Monarch Refueling Station and they got the ground ready for seeding. Walter says they hope to add more plants as the project gets going. She says it’s part of a bigger effort to help the monarch, which is an important polinator.

“The Iowa Monarch Conservation Consortium has a lot of other partners as well, so they’re really implementing a statewide strategy to help build up this habitat for the monarch butterfly,” according to Walter.”Because if you look at migratory patterns for the monarch butterfly, it really covers the entire state. What’s cool about this is that only one-tenth of an acre, a really small patch of habitat, can make a difference.”

Walter says they anticipate the monarch habitat will become a good volunteer opportunity for the fuel plant employees. She says plant employees can oversee the project and its maintenance and she says it should be a “low cost” venture. There are more than 40 biodiesel and ethanol plants in the state.