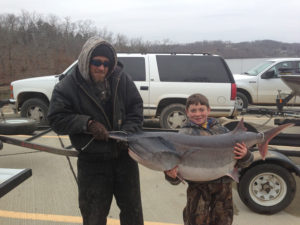 The Iowa Department of Natural Resources is making changes in the paddlefish season in western Iowa to try and increase interest.

DNR fisheries biologist Ryan Hupfeld says the ability to catch paddlefish on the Missouri and Big Sioux Rivers in western Iowa returned in 2015 after nearly 30 years of being banned to protect the species. He says they’re now adjusting some things after the initial interest fell off.

“We’ve seen the popularity and number of tags sold decrease in the recent years, and there’s always extras to go around,” Hupfeld says. “We also sent out a survey card that anglers return and it kind of guided our efforts to making some changes to the season this year to make it more popular.” One of the changes now splits the purchase of tags into two periods, and allows you to buy two tags if there are tags remaining after the first period.

The timing of the season has also been tweaked. “We are starting it much earlier — we are starting it on February fourth and it ends on April 30th. Also, due to the anglers’ comments, we are allowing the harvest of rough fish including Asian carp during the paddlefish snagging season,” Hupfeld says. The previous seasons had started in March.

Hupfeld says they knew they had to do something after seeing the fish numbers. He says there were more than 300 fish taken in 2015 and it has dropped down to 100 in the last two years. Hupfeld says moving the season date back adjusts to the river conditions, which may’ve played a role in the drop in harvest.

“On the river systems where there is not a dam and they congregate, a lot of times in the colder time periods when water temperatures are cool they are in these deep overwintering holes where you might be able to target them before they migrate up north in the spring,” Hupfeld says. Hupfeld says they’ve tried to adapt the season based on what they heard from anglers, and says it’s key for anyone buying a paddlefish tag this year to return the survey card.

“All these suggestions that we’ve gotten in the last couple of years have kind of guided our efforts in hopefully making the season more successful for anglers,” according to Hupfeld. “This year if you do purchase a tag, please keep note of your catch and effort and return those cards whether you harvest a fish or not. We appreciate any input provided and take that in consideration in moving forward with the season and hopefully make it more successful for everybody.”

You still have until January 7th to buy a 2018 paddlefish license for the Missouri and Big Sioux rivers. For more information on the season, go to the DNR’s website.