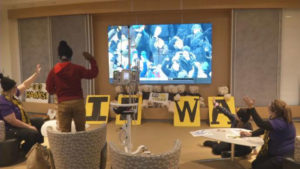 Some of the youngest University of Iowa football fans watched the Pinstripe Bowl last night on a big screen at the U-I Stead Family Children’s Hospital.

At every home game this year, fans inside Kinnick Stadium would wave to the sick children in the nearby hospital at the end of the first quarter. Even though Iowa’s bowl game was in New York, fans still kept the “wave” going from Yankee Stadium.

Fiston Namutchibwe, who suffers from sickle cell disease, watched from the hospital in Iowa City. “I think it’s pretty cool that they’re waving at me and I’m waving back saying ‘thank you for all you’re doing for me,’ Namutchibwe told KCRG-TV. 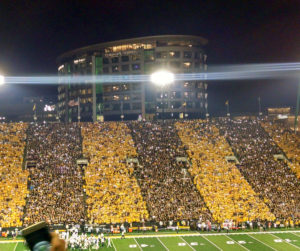 Fans in Kinnick Stadium do the Wave during a September night game.

Most Hawkeye fans decided against making a bowl trip this year since the game was played in a cold weather location like New York. As a result, local bar owners told KCRG-TV their businesses were packed with patrons wearing black and gold. Kitty Lake is manager of the Vine Tavern and Eatery in Iowa City.

“It’s better if the bowl game is somewhere cold, because everybody from Iowa wants to go somewhere warm,” Lake said. “Nobody wanted to go to this cold game.” Iowa’s victory over Boston College ended the Hawkeyes’ five-game losing streak in bowl games.