You are here: Home / Fires/Accidents/Disasters / Fire deaths in the state highest since 1993 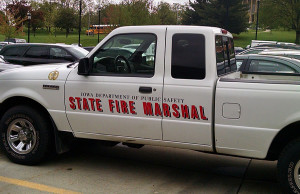 More people have died in fire-related incidents in Iowa this year than any year since 1993.

Ron Humphrey, a special agent with the Iowa State Fire Marshal’s office, says the tentative fire fatality count for 2017 has climbed to 53.

“We’ve confirmed 38, but I’ve got 15 that are still in the ‘unconfirmed’ category because we’re waiting on autopsies, confirmations from fire departments, or other reasons,” Humphrey told Radio Iowa.

Two fires within the last week in eastern Iowa’s Scott County killed nine people, including four children. Two more people were killed in a school bus fire near the western Iowa town of Oakland on December 12.

“Tentatively, we’ve had about 20 fatalities since Thanksgiving, including the multiple fatalities in Davenport and Blue Grass in the last week,” Humphrey said. The fire in Davenport on December 21 killed a 23-year-old woman and her four children; ages 5, 4, 2, and 9 months. Investigators said their mobile home did not have a working smoke detector.

The 53 (tentative) fire-related fatalities in Iowa this year compares to 47 last year and 31 in 2015. This year’s unconfirmed total is more than double the 26 fire deaths in 2013.