You are here: Home / News / 2017 is going out on ice with subzero temperatures 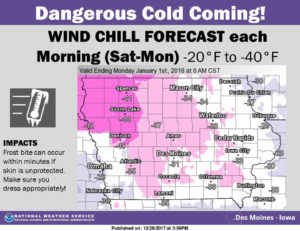 The forecast for the holiday weekend ahead likely isn’t one which the state tourism folks will tout to lure visitors to consider Iowa as a vacation destination.

Besides the latest round of snow, it’ll be dangerously cold, with wind chill indices likely reaching the 40s-below zero in some areas. Meteorologist Allan Curtis, at the National Weather Service, says the flakes are flying and much of Iowa will have new snowfall soon.

“We are looking at snow and there’s a fair chunk of the state that’s already seeing light-to-moderate snow, generally northwest and north-central Iowa,” Curtis says. “That’s going to continue to spread southeast through the day and on south. The heaviest bands are going to be north of the Des Moines area, up towards Waterloo and over towards Tama.”

One of the forecast maps shows the Cedar Rapids-Iowa City corridor may be getting six inches of snow by tonight. 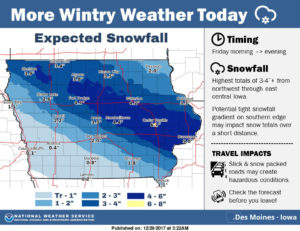 “That would be likely on the high side at this point,” Curtis says. “We’re not going to rule that out by any stretch for some local amounts. The majority of people are going to be in the three-to-four range and we will probably see a handful of four-to-five and if we do see a six-inch amount, that’s certainly not out of the question.” It’s been bitter cold all week, but the forecast calls for the situation only to get worse for the next three to four days, just in time for the three-day holiday.

“Today’s going to be the warmest day through the new year,” Curtis says. “Saturday, Sunday, Monday, we’re looking at highs below zero across pretty much the entire state and if that wasn’t bad enough, we’re also talking some absolutely brutal wind chills, especially come Saturday.” It appears the final days of the year will also be among the very coldest.

“Parts of northern Iowa are looking at easily negative-30 degrees in the morning, approaching negative-40 possibly,” Curtis says, “and on south through the state, at least negative-20 at times.”

Temperatures should warm slightly by Tuesday or Wednesday, he says, with highs at least climing into the teens above zero.