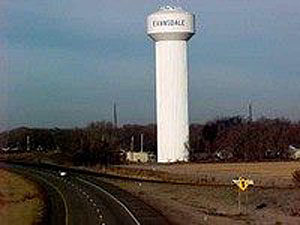 The City of Evansdale is hoping a company that uses wands of heated water can clear out the ice cap that developed in their water tower Monday, shutting off water for a short time.

Evansdale Mayor Doug Faas says sensors that tell the pumps to bring more water to the tower apparently froze up in the subzero temperatures. “When they froze it also froze the alarm system — and then what happened was because no water was circulating there, it developed an ice cap on top of the tower — which meant it couldn’t provide any water to the city,” Faas says.

He says he lost water around 6 p.m. Monday, but it came back about an hour later when the city started pumping water into the system from the wells. Faas says they’ve had several discussions on how to take care of the ice cap, and at first thought they would have to send in divers in thermal suits. But he says they have found a specialized company that can clear out the ice cap.

“For a lack of a better term, they use power washers,” Faas says. “They climb clear up to the top of the water tower and they have these wands — and down at the bottom they have not quite boiling water — and they just spray it in there until the ice cap melts.”

The mayor says the company may get into town Wednesday, but it may not be until Thursday. He says it’s unknown how quickly they can thaw out the water tower. “Anywhere form 18 minutes to two days,” Faas says, “so that’s a pretty big span. Unfortunately, the longer that water sets there not being circulated, the deeper the ice cap becomes.”

Faas says state regulations required them to ask residents to boil any water that they are going to drink of use in food preparation.

He says they tested the water and took samples to the lab and those results should be back by Thursday, and the boil order could be lifted by then. Faas says the city is providing some drinking water for residents at the community center. Faas has lived in the Waterloo suburb for 36 years and says this has never happened before.

“Our person who works in the water department is talking to Waterloo and they have never heard of anything like that happening either. It’s just a fluke, freak thing because of the cold weather,” Faas says. Evansdale residents should boil water for one minute and let it cool, and it can then be used it for cooking or brushing their teeth.

The Waterloo Schools have two elementary buildings in Evansdale and the administration says classes will resume as planned from the Christmas break Wednesday. The district plans to have bottled water available during the day for students and staff at both Poyner Elementary and Bunger Middle schools.