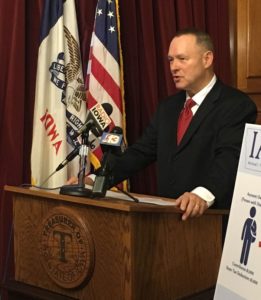 The new federal tax law allows the use of money in college savings plans to pay for tuition for elementary and high school students, but State Treasurer Michael Fitzgerald says the College Savings Iowa plan isn’t set up for that change

“By law, Iowa law, it can only be used for students going to college — not K-through-12,” Fitzgerald explains. “Now the federal government says it’s okay to do that — but in Iowa you can’t.

College Savings Iowa is what is known as a “529 plan” and it allows you to deduct contributions to the plan from your state income tax as long as the money is used for qualified college expenses. Fitzgerald says the state deduction won’t be allowed for K-12 expenses unless the law changes.

“I have told the governor and the legislators if they want Iowans who send their kids to private schools to be able to use this money to pay for their tuition and others costs, there must be a law change,” according to Fitzgerald. “The state treasurer can’t grant tax deductions, but the legislature and the governor can.”

He says you should be aware of the issue as you prepare your tax returns for 2017. “I don’t want Iowans to take what 529 money they have now and pay for private schools — K-through-12 — and lose that great tax deduction that we’ve been giving them in the state of Iowa,” Fitzgerald says.

Fitzgerald says changing the Iowa law to meet the federal tax law on the 529 plans might not be an easy decision for the governor and legislature as it would impact an already tight state budget.

“Whenever you hand out benefits, there is a cost. Just this year between now and July 1st, it would cost about four-and-a-half-million dollars. And every year after that about $8 million,” Fitzgerald says. “So, it’s a significant benefit if they would decide to offer it.”

Fitzgerald says the attorney for the College Savings Iowa plan says money withdrawn from the plan for K-12 expenses under current state law would have to be added as income to your tax return.