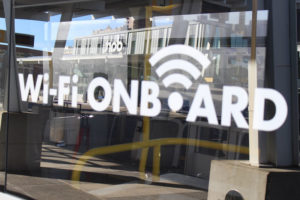 The bus system that serves the Des Moines metro area is now offering passengers use of free Wi-Fi while they ride.

“We did pilot it on two routes over the last year, and we found that every week there were about 1,300 connections. So we found that it was something that riders really did use,” Wanke says. Wanke says they started looking at the possibility of offering the Wi-Fi as they moved to new high-tech fare boxes. 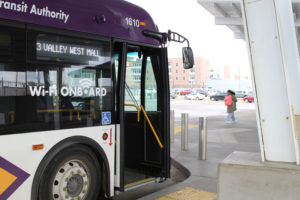 “Part of the reason a lot of people take the bus is so they don’t have to drive and can do other things,” according to Wanke. “So, having that Wi-Fi connection makes it possible for them to connect to work or social media or other things without having to worry about their data limits.” The “free” Wi-Fi in many places such as airports comes with ads that you have to view as part of the service. Wanke says that’s not the case with the bus Wi-Fi.

“You just have to agree to the terms of service, so there’s no advertising, but you have to agree to the terms,” she says, “and that’s all you have to do and you’ll be connected for the rest of your ride.” Wanke says the buses and other vehicles average around 20 riders, and the bigger buses can have 50 or more, but she says the Wi-Fi should be able to handle everyone.

“And certainly if it is really crowded, and depending on what people are dowloading and streaming, sometimes there might be some slowness related to that,” Wanke explains. “But we are working carefully to monitor how that is going — asking people if they have problems, asking them to give us some feedback to make the service work as well as possible.” Wanke believes DART is the only bus service in the state offering free Wi-Fi.