You are here: Home / Sports / Drake rolls to 3-0 start in Missouri Valley 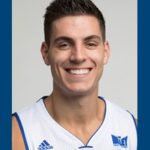 For the first time in 10 years Drake is 3-0 in Missouri Valley Conference play. Reed Timmer scored 28 points as the Bulldogs hammered Illinois State 87-62.

The Bulldogs raced out to a 14 point halftime advantage and cruised to their ninth win of the season.

“I thought we really shared the ball and played with good pace”, said Drake coach Niko Medved. “I think we had 20 assists which was terrific. When you do that and you play team basketball on both ends and guys are flying around and sharing the ball and shots were going in it is fun.”

Timmer was six of 11 from three point range and as a team the Bulldogs finished with 15 three pointers.

“It helps to know knock down your first few as a shooter”, said Timmer. “I know this team can go out there and do that any night so it was not shocking.”

Drake held the Redbirds to 37.5 percent shooting to make ISU the fourth-straight opponent Drake has held under 40 percent.