You are here: Home / News / Governor says she followed ‘intent of law’ in balancing state budget 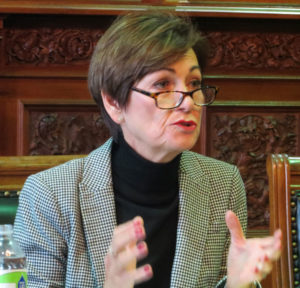 “I feel that we operated within the intent of the law,” Reynolds said this morning in response to a reporters’ question. “The statute is outdated.”

This fall, Reynolds used $13 million from the state’s Economic Emergency Fund to erase a deficit and close the books on the last state budget. A Democrat in the legislature filed a lawsuit this week, arguing the governor’s move was illegal and she should have called legislators back into special session this fall to fix the budget. House Democratic Leader Mark Smith of Marshalltown did not file the lawsuit, but he accused Reynolds of putting legislators of both parties “in a box” by acting on her own.

“The governor should not be above the law here,” Smith said this morning.

House Speaker Linda Upmeyer of Clear Lake, the top Republican in the legislature, said the House and Senate will consider updating the law about withdrawals from the state’s economic emergency fund.

“I do believe that Governor Reynolds was entirely complying with the spirit of the law,” Upmeyer said this morning. “…It was, perhaps, not the letter of the law, so we will be happy to change that.”

“The statute is outdated and the legislature has the opportunity to come in and update it and I would think that’s what they want to do instead of filing a costly lawsuit,” Reynolds said.

The 2018 state legislative session begins on Monday. Governor Reynolds will provide details on some of her policy proposals Tuesday when she delivers the annual “Condition of the State” address to legislators.