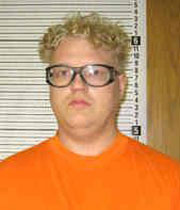 A Manchester man is charged with failing to comply with the state’s sex offender registry.

Manchester Police received information from another agency that a wanted man was living within the city limits. The man, 35-year old Eric Norelius, was required by sex offender register law to register any address change with the Delaware County Sheriff. Officers checked the home and found Norelius. They say he had been living at the home for at least ten days without registering with the Sheriff’s Office.

Norelius was taken into custody Tuesday. He has been charged with a felony count of failure to comply with Sex Offender Registry requirements.