You are here: Home / News / Economist less than optimistic about NAFTA’s survival 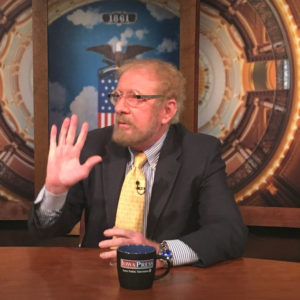 A Creighton University economist says rural America will take a financial hit and “thousands” of Iowa jobs will be lost if the North American Free Trade Agreement is scrapped. Ernie Goss says economists “don’t often agree on many things,” but he says 99.9 percent of economists see trade as “a real positive.”

“We see it sweeping the nation where it’s a zero-sum game: if Mexico benefits then we must be losing. Not true,” Goss says. “We both benefit from NAFTA and I just did a panel at the Federal Reserve in Chicago and the moderate said — and he’s more in tune with what’s going on than I am — and he said he expected NAFTA to go away and I’m like, ‘Are you kidding me?'”

Negotiators from the U.S., Canada and Mexico began renegotiating NAFTA in August, but of the 30 chapters of the deal that have been discussed, only two have been resolved. With the president’s stated goal of reducing the U.S. trade deficit, Goss says he is “less than optimistic” about NAFTA’s survival.

“If you look at…the many issues that President Trump has advanced — and I agree with some, disagree with others — but I hope this is a negotiating strategy. I hope he really doesn’t believe this,” Goss says. “…If you wish to reduce the trade deficit which is probably going to rise over the next six months to a year…go into a recession. A trade deficit, unfortunately, is an example of an expanding economy.”

Goss warns that once foreign customers stop buying U.S. commodities, it’s difficult to restore the trading relationship. He points to U.S. beef sales to China which were suspended 15 years ago and only resumed this summer at a very low volume.

Goss made his comments today during taping of the “Iowa Press” program that airs tonight on Iowa Public Television.