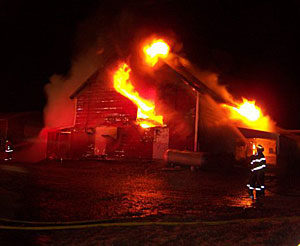 Iowa farmers are being warned that barn fires are much more likely during prolonged cold spells.

Jay Harmon, a swine housing specialist and an ag engineer at the Iowa State University Extension, says some fires occur after barns have been left sitting empty for a while.

“We tend to shut the ventilation off because it costs something to heat and that’s when some of the fires have occurred because methane can build up in the barn,” Harmon says. “You get ready for the next group of pigs to come in, you flip the switch on the heater or you raise the temperature on that unvented heater, the flame hits the methane and it can cause a fire.”

Harmon says some fire prevention steps should be taken ahead of time. “Making sure the furnaces are operating properly would be one thing,” Harmon says. “Just normal practices to look for frayed wires or other things that could be an issue, but probably just some of the practices would be important, too.” Harmon says it’s also critical to ensure safety exits in the barn are accessible.

“Making sure you have emergency exits in the barn that are not blocked is important,” Harmon says. “Some of our facilities are quite large and if you’re at the far end and there’s no way out, that’s not a good situation. Always make sure and think of escape routes in case there is a fire.”

Harmon says it’s also a good idea to have fire extinguishers available as well as quick access to water. Also, program the number of the local fire department into your phone.