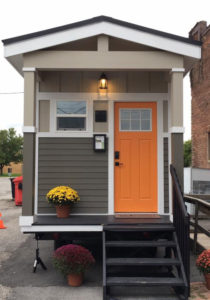 An advocate for the homeless in Iowa’s capital city says he’s confident he’ll find a location for a village of so-called “tiny homes.”

Joe Stevens is the co-founder and CEO of Joppa, an organization that connects homeless people to services. He says he’s been looking all around Des Moines for a spot to place 50 of the 96-square-foot houses.

“We’ve had overwhelming support from our corporations and churches, and our mayor, I believe our city manager is supportive, we’ve got a lot of momentum,” Stevens said. The tiny homes would provide temporary shelter for the homeless in the Des Moines-area. Stevens expects to find a location for the village by the end of the year.

“We’re actually looking all over Des Moines, as well as nearby communities,” Stevens said. “A tiny home village is a transitional location where you go for 6-to-24 months to gain a source of income and overcome your other barriers to housing.” Stevens is also hoping to construct low-rent cottages as a more permanent answer to homelessness.

After securing a spot for the tiny home village in Des Moines, Stevens hopes to take the concept to at least two more Iowa cities. He made his comments on the Iowa Public Radio program “River to River.”