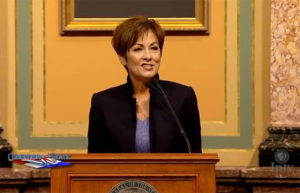 Governor Kim Reynolds began this year’s “Condition of the State” address by acknowledging she’s the first female among Iowa’s 42 governors to deliver the annual speech.

“What a country and state we live in, where a small town girl from rural Iowa can become governor and have the opportunity to serve Iowans at the highest level,” Reynolds said. “I hope that can be an inspiration to every waitress, every grocery checker, every overworked and stressed out mom, and the little girls who dare to dream: In Iowa, if you’re willing to work for it, those dreams can come true.” 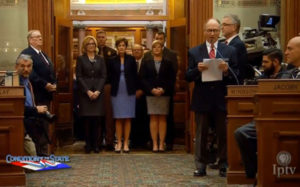 Governor Reynolds prepares to enter the House Chamber for her speech.

“Throughout history, sexual harassment has been a stain on our culture, a destructive force—in politics, media and entertainment, in workplaces large and small—in all facets of life. And it must stop,” Reynolds said.

Reynolds called on “all of us in public office” to serve as models for the public and private sector.

“As a woman, a mother of three girls, a grandmother, wife, sister, and daughter, I understand we’re at an unprecedented moment in time,” Reynolds said. “I also understand that this is not a partisan issue. It can’t be fixed by legislation or rule-making alone. You cannot legislate kindness or respect or morality. They must be taught. And that means the solution starts with every individual, man or woman.”

Reynolds used her speech to hail Republican initiatives passed in the 2017 legislature, like the changes in Iowa’s collective bargaining law. Then Reynolds sketched out what she described as “unfinished business” in the GOP agenda. 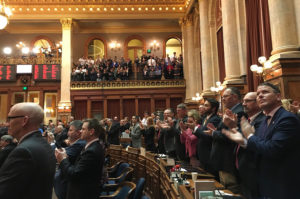 “Improving water quality is a shared goal of Iowans.  Urban and rural stakeholders have worked collaboratively making great strides,” Reynolds said. “My hope is that a water quality bill is the first piece of legislation I sign as Governor.”

Next on the list: tax policy. She’s calling for an end a controversial state tax deduction for federal taxes. It makes Iowa’s top income tax rate look higher than it actually is when compared to most other states. Most other states do not have the deduction.

The governor released a proposed state spending plan for the coming year as well as cuts in the current year’s state budget. Her recommendation is that Iowa’s public K-12 schools get a 1.5 percent boost in general state aid, along with $35 million dollars to use as the schools wish. The $35 million annual allotment had been reserved for efforts to reduce class sizes in the early grades and state law does not call for the allotment to be included in the next state budgeting year.