You are here: Home / Education / High school students from China could fill former university in Clinton 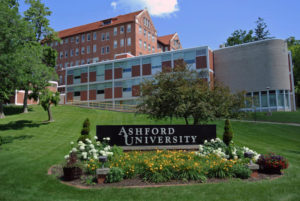 Students may once again fill the halls of a vacant college campus in eastern Iowa. Clinton County leaders have approved incentives for a development group called Clinton Catalyst, which wants to host high school students from China at the former Ashford University in Clinton.

Board chair Shawn Hamerlinck says the county will rebate property taxes up $755,000 over 20 years, if the school reaches certain benchmarks.

“Based on the increased valuation and the amount of investment they put into it, it’s performance driven,” Hamerlinck says. “As their valuation increases and as the tax base increases, then the total amount that could be paid back is this $755,000. That is great because we’re not actually taking away from Clinton County residents.”

The benchmarks are for at least 20 full-time employees and 20 full-time students by the end of the first year, and at least 70 staff and 235 students within ten years.

Clinton County is the fastest-shrinking county in the state of Iowa,” he says. “We lost 2.4% of our total population last year. To have an influx of not only economic development but people moving in and out, it would benefit the entire county.” Hamerlinck says the Chinese students could begin arriving next summer and start attending Clinton High School in the fall. They would pay out-of-state tuition.

Hamerlinck says, “Clinton Catalyst will be paying taxes on the Ashford University complex and if they hit those benchmarks at the end of the fiscal year, they will be granted back the portion that they paid in the property taxes, minus the debt service levy.” With some slight differences, the city of Clinton has also approved rebating property taxes on the former Ashford campus to help Clinton Catalyst. Ashford University closed its 15 acre campus two years ago, but still offers online courses.