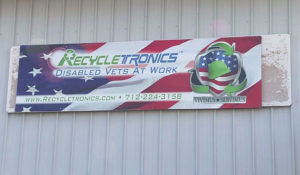 The lawsuit says Rochester and his companies collected waste disposal fees and then illegally stored or disposed of millions of pounds of electronic components, including hazardous waste. Information in the suit says the properties in Iowa contain more than 12 million pounds of electronic waste and another 4.5 million pounds at two sites in Nebraska.

It also says that Rochester and his former business owe the state more than $75,000 for a 2011 loan for equipment used to recycle electronic waste.