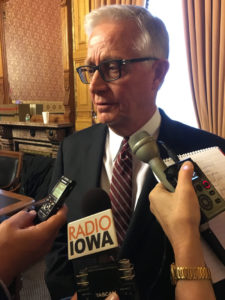 The chief justice of the Iowa Supreme Court today said Iowans are “losing access to justice” because of dwindling financial support of the courts.

Due to budget cuts, Chief Justice Mark Cady said there’s been a 10 percent reduction in the court system’s workforce just in the past year.

Cady spoke with reporters shortly after delivering his eighth annual address at the statehouse. During his speech, Cady told legislators “the writing’s on the wall.”

“While it is nice to report on our progress towards justice for all, I feel obligated to also report on our shortcomings,” Cady said in his speech. “These deficiencies are not what Iowans expect or deserve…We must remember that justice ultimately comes from the people who work in the justice system.”

There are 182 fewer people working in the Iowa court system today compared to a year ago. There are 11 judgeships that are unfilled and about a dozen current judges plan to retire. Cady said “essential” court operations are suffering, with courtroom delays more common, the backlog of cases growing and the problems are worst in rural counties.

“There are fewer judges, fewer court reporters, fewer case schedulers and fewer juvenile court officers,” Cady said. “It means there is a daily struggle to coordinate and deliver services. It means Iowans are losing access to justice.”

Representative Gary Worthan, a Republican from Storm Lake, is chairman of the budget panel that drafts the court’s budget. He is sympathetic to the court’s situation.

“Crisis? No. Tipping point? I think we’re awful close,” Worthan told reporters this morning. “Over the last eight years, we’ve kind of pushed down with a 2-by-12 evenly over everybody.”

Worthan said not only the courts, but the state’s prisons and Public Safety Department have reached a “critical” point in terms of staffing. Worthan said it’s time for legislators to set priorities and end spending in other areas.

Governor Kim Reynolds yesterday recommended a $1.9 million in the court’s current budget. That proposal is part of a plan to trim the state budget by nearly $35 million o deal with lower-than-expected state tax collections.