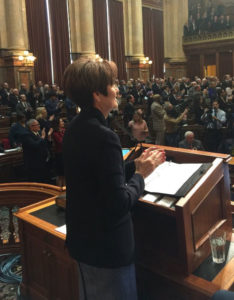 Governor Reynolds during the Condition of the State address.

Governor Kim Reynolds on Tuesday said legislators should get rid of a state income tax deduction that makes Iowa’s personal income tax rates look higher than they actually are. Reynolds used her “Condition of the State” speech to lawmakers to call for ending the state deduction for federal taxes.

For decades, Republican legislators have resisted getting rid of the state deduction for federal taxes paid, even when Republican Governor Terry Branstad proposed it nearly three decades ago. However, Iowa business groups have begun pressing the idea as a way to make Iowa’s income tax system more competitive and Iowa’s new Republican governor is now making that case, too.

She’s asking legislators to table any changes in corporate taxes and tax credits, however, until a bipartisan panel reviews how businesses react to recent federal tax changes.

“It may take a multi-year effort, but we are going to completely reform our tax code,” Reynolds said.

Republicans in the legislature are anxious to pass tax reform sooner rather than later. Senator Randy Feenstra, a Republican from Hull, is chairman of the Senate Ways and Means Committee where tax policy is debated.

“This is a watershed year for the State of Iowa,” Feenstra told Radio Iowa yesterday. “When the federal government passed their tax reform, that really puts a lot of pressure on us to do something.”

Senate Minority Leader Janet Petersen of Des Moines told reporters she and other Democrats are wary the state budget might fall into bigger deficits if Republicans and Governor Reynolds push through big tax cuts.

“My concern is there’s still a cloud hanging over her head with the current budget situation,” Petersen said immediately after Reynolds’ speech. “…We want to make sure anything we’re doing on tax reform benefits middle class Iowans.”