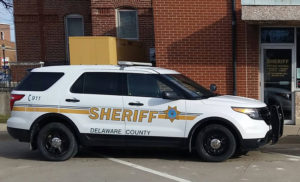 Delaware County Sheriff John LeClere has released new information on the death of a man whose SUV went through the ice on Lake Delhi.

LeClere says that tire marks indicate that 23-year-old Alex Salow of Delhi may have been doing donuts with his SUV before plunging through the ice on the north end of Lake Delhi Sunday. A witness also spotted a vehicle doing donuts on the ice Sunday night.

When rescue crews arrived on the scene Monday they located the SUV submerged in about 8 feet of water. Salow’s body was found after a camera was used to look inside. An autopsy has been ordered on Salow’s body.