You are here: Home / News / Warm weather set to give way to snow and ice 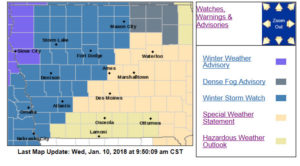 Parts of Iowa will see high temperatures in the low 50s this afternoon, but highs Friday may only be in the teens.

A cold front is approaching that promises to drop up to six inches of snow on areas of the state. Meteorologist Mindy Beerends, at the National Weather Service, says the rain will gradually change to freezing rain and then to snow as the storm system progresses.

“The snow’s going to start moving into west and northwestern portions of Iowa late tonight and will continue that transition from northwest to southeast through the morning on Thursday,” Beerends says. “The heaviest band of snow we’re expecting is somewhere in west-central Iowa up through portions of north-central Iowa.” She says residents in several counties and communities need to prepare for another round of slippery snow.

“The heaviest band we’re looking at should fall in west-central Iowa up through north-central Iowa, somewhere along a Denison to Fort Dodge to Algona to Forest City line,” she says. “At this time, they’re looking at four to six inches.” Depending on how quickly the storm system moves, a wide section of western and central Iowa could be getting whalloped with rain, freezing rain and snow during Thursday’s busy morning commute.

“There will be a transition period where roads could get icy as much colder temperatures move in and a period of light snowfall,” Beerends says. “Even during that time, with the strong winds that are expected, there could be difficulty with travel even in regions that aren’t expecting the heavier snowfall.” With such warm weather today, most of the snow will melt and the roads will be wet and slushy, setting up potential driving hazards when the much-colder air arrives.

“We’re still looking in that timeframe of late tonight up through Thursday and definitely the morning commute in most locations, especially the western half of the state, could have problems,” Beerends says. “I encourage everybody to take it slow in areas where visibility could be reduced and suspend travel, if needed.” See an updated forecast at weather.gov.