You are here: Home / News / Democrat chair and governor each make their cases in Mason City 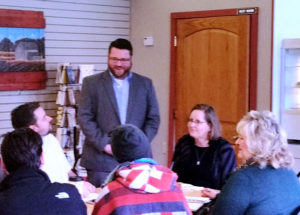 Republican Governor Kim Reynolds and the Iowa Democratic Party chairman Troy Price were both in Mason City on Wednesday afternoon to discuss the condition of the state.

Price met with a handful of supporters at the Borealis coffee shop. He says Reynolds is falsely painting a rosy picture of the state.

“The rhetoric doesn’t match the reality on the ground. You heard that today that there are folks that have serious concerns, whether it’s health care and the privatization of Medicaid. Whether it’s about the continued under-funding of our schools. Whether it’s about the continued attack on workers, from the collective bargaining law that passed last year, the gutting of workers compensation laws, and just the lack of emphasis on trying to grow jobs in all corners of the state, not just the big cities,” he says.

Price says Iowans are suffering under the Reynolds administration. “People have real concerns out there. People are seeing it every day, they are feeling the effects of the Reynolds budget and the GOP policies in communities like here in Mason City, and also in a lot of the smaller communities around north Iowa,” according to Price. “People are concerned, and they are fired up, and they want to take back their state, and that’s what Democrats are fighting for right now.”

One of the main topics discussed by the group was water quality. Price says it’s a critical issue that needs to be addressed by the legislature right away.  “Democrats have been championing water quality for years and we’re going to continue to fight for it,” Price says. “We hope the Republicans will work with us on it, but we want to make sure that whatever is proposed is a serious solution that’s going to actually impact and clean up our water, and not just kind of paper over the problem. There needs to be serious and real solutions on that.”

Reynolds spoke to about 75 supporters in a different coffee shop, Cabin Coffee Company. She says she doesn’t agree with the doom and gloom approach Democrats are taking.

“They want the state to fail, I don’t. I’m optimistic about the future and the capacity that exists within the state. I don’t know where they are traveling, but I travel all across the state, and I talked to these job creators that really are just ready to grow and expand, and they are investing in our schools and Iowans.”

Reynolds says there are a number of things going right for Iowans. “We’re the third best managed state in the nation, we’re the number one state for middle class families. Unemployment is at an all-time low. Number one in graduation. We’re the number one state for kids taking dual enrollment. That helps reduce the cost of higher education, and it really helps their chance of completing,” Reynolds says. “We’ve got good things happening. We get this farm economy cranking, which we are hoping to do, we’re going to continue to see good things happen in the state.”

Reynolds says it’s time to look at tax breaks to corporations. She says, “I called for a bipartisan task force to look at every single tax credit, and really do the due diligence and take a look at what benefits it provides, if it’s time to eliminate it, if we can do something with it, or how collectively we look at that and reducing the corporate tax rate. I think it’s really important to look at that together and that makes a lot of sense.”

Both Reynolds and Price are scheduled to make stops in the Cedar Rapids metro area and Muscatine later today.