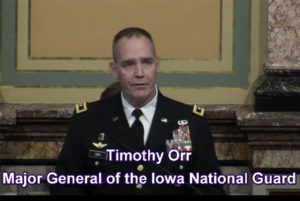 The leader of the Iowa National Guard says the “international situation today is more complex and demanding” than anytime he’s seen in his 39 years of service.

Adjutant General Timothy Orr delivered his Condition of the Guard address this morning at the statehouse.
Audio: General Orr’s speech 26:00

“Our state’s contribution to providing ready forces for the war fight can’t be overstated, as evidenced by approximately 800 Iowa National Guard soldiers and airmen currently mobilized for combat operations around the globe,” Orr said.

Nearly 400 Iowa National Guard soldiers from companies in Muscatine, Davenport, Waterloo and Boone were part of a federal call up in September for assignment in the Middle East, North Africa, Afghanistan and Iraq.

“This deployment is the largest single-unit deployment of the Iowa National Guard since 2010,” Orr said. “We expect these soldiers will return back to Iowa in the summer of 2018.” There are roughly 9,000 soldiers under Orr’s command. In addition to serving on combat missions overseas, the soldiers are trained to respond to attacks, threats and natural disasters in Iowa and across the U.S.

“I’m happy to report that for 2017, it was a relatively quiet year for our emergency response operations,” Orr said. “We used the available time that we had to prepare, plan and rehearse for potential disaster response on a multitude of scenarios.” The training was put to use over a three-month period late in the year as Hurricanes Harvey, Irma and Maria struck the U.S. Helicopters and air crews from Iowa were sent to both Texas and Florida.

“But, our largest and most sustained assistance came from the 132nd Wing in Des Moines and the 185th Air Refueling Wing in Sioux City,” Orr said. “These units deployed 25 security forces personnel to Puerto Rico in a moments notice, established security for critical infrastructure on the island – including the main airport – and they enabled the restoration of electricity and the transportation of food, water and medical supplies.” The Iowa National Guard also oversees a federally-funded Counterdrug Task Force, which assists and provides training to Iowa’s law enforcement officers.

“In 2017, more than $43 million in drugs and $3 million in cash and assets were seized from drug dealers in Iowa with the assistance of our Counterdrug Program,” Orr said. Around 171,000 doses of Fentanyl and 12 pounds of heroin were seized in Iowa last year, according to Orr.