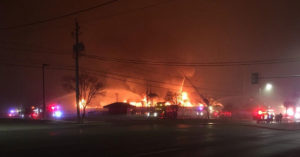 The leader of the Iowa Girls High School Athletic Union says they are still reviewing sites for this year’s state bowling tournament.

Plaza Lanes in Des Moines which had hosted the tournament for the last 15 years burned down in December. The boys and girls tournaments are run at the same time and girls union executive director Jean Berger says one of the issues is finding a bowling center with enough space.

“We need 20 lanes to run a joint boys and girls bowling championship, we may have to split it,” Berger says, “We may have to have the girls go in the morning, boys go in the afternoon, flip it, something like that to get it in this year.”

She says the state bowling association has been helpful as they try to find a site for the tourney. “We’ve got some great venues that we are looking at — just not as big as what we are used to at Plaza Lanes,” Berger explains.

The state bowling tournament is scheduled for February 19th through the 21st. Investigators say the cause of the Plaza Lanes fire was likely accidental.