The Iowa Department of Public Health has confirmed 8 more flu-related deaths — bringing the total confirmed since October to 14.

The deaths reported were four women and one man in central Iowa, two women in southwest Iowa, and one man in eastern Iowa. The average age of those who died was 85, and five of the eight who died from the flu had other underlying health conditions.

In at recent interview on the flu situation, Health Department medical director Doctor Patricia Quinlisk says getting the flu vaccine is still the best way to combat the flu. There were reports early in the flu season that the vaccine is not as effective as it could be, but she says it still provides a lot of protection.

“Somewhere between 30 and 70 percent of stopping you from getting seriously ill,” Quinlisk says. “But it’s not going to stop every sniffle, it won’t, but it will still give you protection. It might mean that rather than being hospitalized you won’t be hospitalized. Rather than being sick for seven days, you’ll only be sick for three days.”

The Health Department says the predominant flu strain this season is AH3N2, which typically causes serious illnesses, hospitalizations and even death, particularly for those who are very young or old and those with weakened immune systems.

Doctor Quinlisk says getting kids vaccinated is important for them and others. “Children tend to be the major spreader of these viruses in our communities. Therefore by vaccinating our children we’re actually protecting the whole community — including grandma at the nursing home — because we stop the spread of the virus,”Quinlisk explains.

Flu symptoms may include fever, headache, tiredness, cough, sore throat, nasal congestion and body aches There are a lot of other illnesses going around and Quinlisk offers some advice to know if you might have the flu.

“Basically what I tell people, is if you have symptoms below the neck , you’ve got a fever, you’ve’ got aches and pains, you’re so tired it’s hard to get out of bed — that’s a pretty good indication that you need to stay home. You probably have something more than just a mild cold,” according to Quinlisk. “But if all you have is symptoms above the neck — a little bit of a runny nose, maybe a little bit of a sore throat, but otherwise you feel fine — you are probably okay to go to work.” 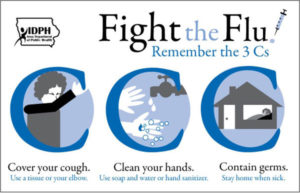 Quinlisk says it’s important to contact your health care provider as soon as possible after flu symptoms begin, especially if you are at high risk of complications and serious disease. Anti-viral medications given within a day or two of when your symptoms start can help cut the severity of the flu. And whether you have the flu or another illness, Quinlisk says follow the three C’s.

“Make sure you cover your cough, clean your hands and you contain your germs by staying at home when you are ill,” she says. Temperatures have dropped once again to below freezing. Quinlisk says the cold weather forces people to stay in side closer to each other and that can increase the spread of the flu.

“The other thing it does is it lowers the humidity in the air, which dries out our nasal mucosa and the back of our throats, and that makes it easier for those viruses to invade into your body and make you sick,” according to Quinlisk. “That’s why it’s really important this time of year to keep hydrated, drink plenty of fluids and to keep your house humidified keep that humidity in your house high enough that you fight off those viruses.”

For more information on the flu visit the Iowa Department of Public Health’s website.