You are here: Home / News / GMU research on State of Iowa regulations (AUDIO) 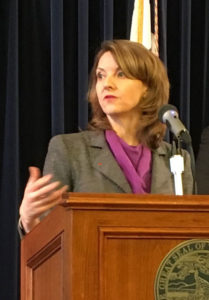 Research from George Mason University indicates state regulations are “overly burdensome.” The university’s analysis indicates the Iowa Administrative Code has more than 160,000 “restrictions” and it would one person 14 weeks to read all of them.

“Excessive rule-making has a very negative impact on things we care about, things like job creation and our pocketbooks, productivity and (it) also creates a lot of stress, particularly for small business owners who often are on the front lines of complying with all these government rules,” said Laura Jones, an executive with the Canadian Federation of Independent Business who is a “visiting research fellow” at George Mason University in Virginia.

Jones joined Governor Kim Reynolds today to tout the research as well as a website Iowa businesses may use to compare the regulations for various industries in Iowa.

“It’s not about wiping out every single rule and regulation,” Reynolds said, “but it’s about finding the balance to make sure we’re protecting the safety and health of Iowans as well as making sure that we’re not creating just unsustainable burdens for especially small businesses and start-ups because we want to encourage them to grow and expand in the state.”

According to the Iowa Association of Business and Industry, manufacturers struggle with state rules about the waste water discharged from factories. State rules restrict the amount of metals that can be found in the discharge. The association’s lobbyists indicate the rules do not adequately take into account the amount of metal in the water that’s coming into the plant.