You are here: Home / News / Reynolds says new Medicaid restrictions may be considered ‘down the road’ 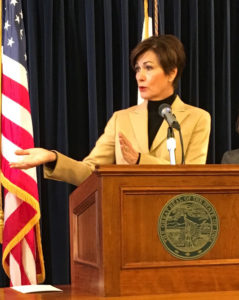 Iowa’s Republican governor today said work requirements for able-bodied Medicaid recipients may be considered in the future, but Kim Reynolds said she’s not ready to act on new Trump Administration guidelines that let states enact new rules for the program.

“That’s something we can look at down the road,” Reynolds said during her weekly news conference.

Reynolds did not offer a timeline for considering the changes now allowed in the government insurance program for poor, elderly and disabled Americans. Reynolds said her “number one priority” right now is getting legislators to approve her “Future Ready” bill that’s aimed at improving the job prospects of under-skilled Iowans.