You are here: Home / News / Warmer weather predicted to wipe out deep freeze 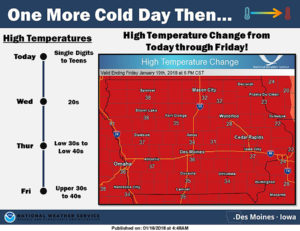 Iowans are facing another day of some bitterly cold temperatures and dangerous wind chills.

While high temperatures today across much of Iowa will only reach the single digits above zero, a roughly 40-degree warmup is on the way. “As we go into Wednesday and Thursday, we’re going to see temperatures go into the 20s and 30s and by Friday, across much of the state, we’re probably looking at temperatures in the 40s,” Ansorge said.

This morning, some light snow and flurries were flying around the state. The next chance for significant snowfall is several days away. “The next big system we’re looking at is probably going to be this weekend,” Ansorge said. “There’s still quite a bit of differences in the track of how the low pressure will move across Iowa, but there’s a chance for rain and snow across the state. As we get closer to this weekend we’ll be able to hammer down more on those details.”

Ansorge said, right now, it appears the colder air associated with the system that might bring snow this weekend will not be as bitter or as long lived as this current round.