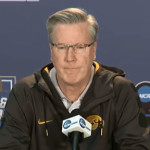 Rutgers hit six three pointers in the opening half then shot a scorching 59 percent in the second half and hammered Iowa 80-64. Junior guard Corey Sanders led four Scarlet Knights in double figures with 18 points as they improve to 2-5 in the Big Ten and 12-8 overall.

“We’ve played a real tough schedule so I told these guys to just keep fighting”, said Rutgers coach Steve Pikiell. “We were ready to play and when we are locked in like that we have got a chance to be a good team.”

Iowa shot only 39 percent for the game and coach Fran McCaffery thought his team settled for too many perimeter jumpers.

“We were shooting turnaround jumpers and a lot of jumpers and we only shot 10 free throws”, said McCaffery. You have got to drive the ball and get it inside but we settled I thought.”