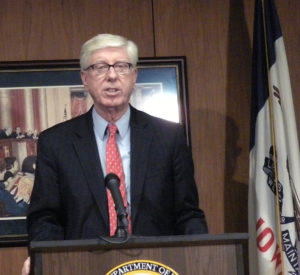 The rules, enacted in 2015, barred Internet service providers from intentionally blocking, slowing down or charging money for specific websites and online content. “What was done three years ago was something that was fundamentally right. What is being done now is something that’s fundamentally wrong,” Miller said. “The Internet service provider – companies like Comcast, AT&T, and Verizon – shouldn’t be able to block particular services to Internet users. They shouldn’t be able to charge more for certain services as opposed to others. And they shouldn’t be able to slow down service and throttle it in other ways, in a discriminatory manner.”

Iowa and 20 other states, on Tuesday, filed a petition for review in the U.S. Court of Appeals, formally commencing the lawsuit against the FCC and the federal government. The District of Columbia is also part of the lawsuit to block repeal of net neutrality rules.