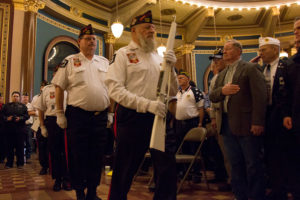 The posting of the colors at the veterans state capitol event.

Veterans rallied at the statehouse today, seeking legislative action on a variety of fronts, including an increase in the property tax exemption for combat veterans.

Dan Gannon, a Marine veteran who served in combat in Vietnam, said it takes more than just saying, “Thank you,” to honor Iowa’s veterans.

“Vietnam Veterans of America’s motto is (this): ‘Never again will one generation of veterans abandon another,” Gannon said. “I can promise you this — all of you here today in attendance or those of you who are listening, under my watch as chairman of the Iowa Commission of Veterans Affairs and as a fellow veteran: ‘You will not be forgotten.'”

The Iowa Commission on Veterans Affairs has an 11-point agenda for the 2018 legislative session. In addition to the recommendation that the military property tax exemption increase from $1,852 to $5,000, there’s a call for some sort of state law requiring “Americanism and Patriotism” be taught in public K-12 schools. The commission is also asking for an expansion of Veterans Treatment Courts that help vets resolve substance abuse and mental health issues and gets criminal charges dismissed if they make progress.

Representative Steven Holt, a Republican from Denison who served two decades in the Marines, is chairman of the Veterans Affairs Committee in the Iowa House.

“I’m working for meaningful accomplishments that changes the lives of veterans,” Holt told the crowd.