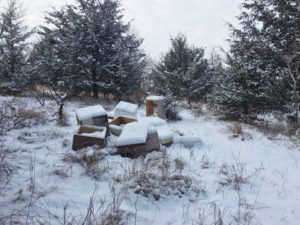 Sioux City police say tips from the public have led to the arrest of two boys in the destruction of honeybee hives last month.

The unidentified boys — ages 12 and 13 — are suspected of the burglary and vandalism at the Wild Hill Honey operation on December 27th. All of the company’s hives were destroyed and half million bees perished in the cold.

The boys are charged with felony criminal mischief, third-degree burglary, agricultural animal facility offenses and possession of burglary tools. Damage to the business was estimated at more than $60,000.

No further arrests are anticipated.