You are here: Home / Human Interest / Basketball games double as a fundraiser for ailing Kirkwood coach

A college basketball coach in Cedar Rapids is undergoing treatment for brain cancer and games played last night served as a fundraiser for his family.

Kirkwood assistant men’s basketball coach Ben Jacobson was in a car accident in October and during examinations at the hospital, doctors discovered Jacobson had an inoperable cancerous tumor in his brain.

Head coach Bryan Petersen talked about Jacobson’s reaction to the diagnosis with KCRG-TV. “He was very positive about it, his energy about his fight, his determination to beat it with the toughness he brings everyday to our program was pretty inspirational,” Petersen said. During the women’s and men’s games against North Iowa Area Community College Wednesday night, Kirkwood staff and students sold baked 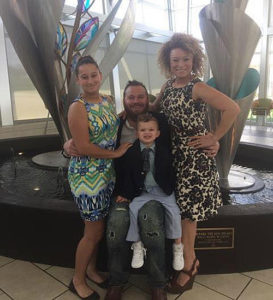 Ben Jacobson and his family.

goods, t-shirts and other items with all of the proceeds going to the Jacobson family.

“I think, more than anything, I hope this day just uplifts his spirits and his family’s spirits,” Petersen told KCRG. Before the games, the NIACC basketball teams presented a check to the Jacobson family. They raised nearly $2,000 from a skills camp.

A Go Fund Me page for the Jacobsons recently topped the $10,000 mark. Ben Jacobson and his wife, Natalie, have two children.