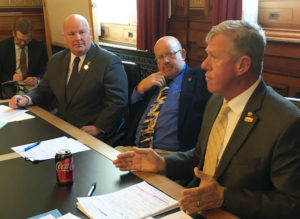 A bid to ban all traffic enforcement cameras in Iowa is among the first bills to get some traction in the 2018 Iowa legislature. Subcommittees in both the House and Senate have approved the ban.

However, competing legislation to keep the cameras, but require fines be funnelled into law enforcement budgets has also cleared a House subcommittee.

Senator Brad Zaun, a Republican from Urbandale, has been seeking a “traffic cam” ban for years and he led a discussion of his bill this morning.

“I think what’s given this effort more energy this year…is what happened in Cedar Rapids where they’ve decided to hire a collection agency and when these people are coming in and they did not pay their tickets to the vendor or the city, they’re not going to get their tax refund,” Zaun said.

Senator Rich Taylor, a Democrat from Mount Pleasant, said the cameras do not take into consideration adjustments drivers make based on traffic conditions.

“Why don’t we just put a GPS on everybody’s car? We’ll have no human equation. If you go over the speed limit, you get a ticket,” Taylor said. “Now if there’s a fire truck coming behind you and you have to speed up to get out of his way, doesn’t matter. You still get a ticket.”

“I think there are folks that as much as they dislike the technology and dislike their use, that there are appropriate areas for their use,” Gary Grant, a lobbyist for the City of Cedar Rapids, told senators on the subcommittee.

“As law enforcement budgets get tighter and tighter, we need to give them force multipliers when they’re out on the street,” Grant said.

Senator Jason Schultz, a Republican from Schleswig, said he’s sympathetic to the idea technology can help law enforcement be more efficient, but he backs the ban.

“Our current system of traffic cameras isn’t acceptable to the broad mass of citizens,” Schultz said. “This way won’t work.”

Representative Ashley Hinson, a Republican from Marion, said there’s “passion on both sides of the issue,” but she favors more regulation rather than an outright ban of the cameras.

“I think it’s kind of a knee-jerk reaction to do an all-out ban,” Hinson said. “Why don’t we see if this addresses those concerns first, and then take the next step if it’s needed.”

Legislators have been debating this issue for years, without taking action. In 2012, the Iowa House voted to ban traffic cameras, but the Iowa Senate never considered the bill.