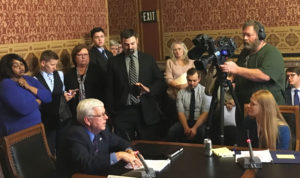 The head of the Iowa Department of Human Services says he’s making changes at the agency in reaction to the starvation deaths of two teens who’d been adopted out of foster care, but Jerry Foxhoven is warning legislators the “bureaucracy” can’t be realigned overnight.

Foxhoven testified before the House and Senate Oversight Committees to review an outside consultant’s report on the agency’s child protection services.

“It takes a lot of courage to take off all your clothes and stand in front of a mirror. It really does and that’s what we really did here,” Foxhoven said. “…DHS said: ‘Let’s just lay it all on the line and take a real clear look at us and tell us what we’re doing well and what we’re not doing well, so we can start formulating a plan.'”

Foxhoven became DHS director in June, after the deaths of teenagers in Perry and West Des Moines where adoptive parents now face criminal charges. Foxhoven has ordered yearly medical check-ups for kids whose parents are getting state adoption subsidies — something he says no other state is doing.

Members of the Oversight Committees were largely complimentary of Foxhoven’s work thus far. However some, like Democratic Senator Rob Hogg of Cedar Rapids, raised concerns about the high number of child abuse investigations social workers are handling.

“I read the report…It’s got some pretty bad things in there,” Hogg said. “…Case loads far exceed those that are recommended nationally. Not enough training.”

Foxhoven said with the existing state budget constraints, he doesn’t have the money to hire more case workers, so he’s working to ease the stress for the workers he does have.

“We are a bureaucracy beyond bureaucracies. We’re the largest state agency by far,” Foxhoven said. “…As I meet with workers, I say: ‘Tell me what’s driving you crazy.’…I’m basically saying: ‘Tell me what you’re heartburn is. I’m your Maalox.'”

Foxhoven has ensured social workers who visit homes to investigate child abuse allegations have a state-issued cell phone. Social workers had been relying on printed-out Mapquest directions rather than a cell phone’s more accurate GPS.