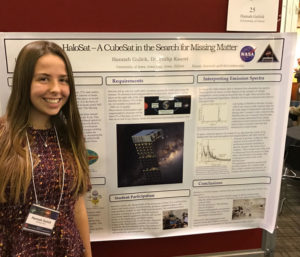 Two University of Iowa students leave Friday for Scandinavia where they’ll learn how to design, build and operate instruments onboard a rocket, which they’ll launch.

Organizers of the “rocket school” say the five-day, intensive program in Norway will give the students a wealth of experience in rocket design, flight and data gathering. Hannah Gulick a U-I sophomore from Spirit Lake, is thrilled to be making the trip.

“My dream is to be a researching astrophysicist,” Gulick says. “I would like to involve spaceflight instrumentation in my research. Being able to take a campaign for a rocket that normally takes 15 years and put it into four days provides invaluable experience for me and my future.”

“We will have the entire campaign of a rocket,” Gulick says. “So, we will be helping to design instruments for it, design the software that will go onto the rocket. We will actually build the instruments and the software for the rocket and then we will see the rocket launch and we will get data back then and be able to diagnose our data and find out about things like magnetic fields around the Earth.”

She hopes to someday apply what she learns to develop “cube satellites” for NASA.  Gulick recognizes she’s pursuing a very complicated field of study — becoming a rocket scientist — but she believes she’s well-prepared for the challenges ahead and gets plenty of encouragement.

“There are many women, even inside my department, that are inspirations for me,” Gulick says. “I go to women’s conferences for physics all the time and it’s just great to see what we’re capable of.”

The 7 foot-tall rocket should be launched late next week to a height of 10 kilometers, or about six miles. The program is called CaNoRock, the Canada-Norway Student Sounding Rocket exchange program. It’s a partnership between the Universities of Alberta, Calgary and Saskatchewan, the Royal Military College, the University of Oslo and the Andøya Space Center in Norway.