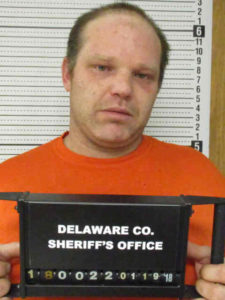 A northeast Iowa man is facing vehicular homicide and other charges related to a fatal crash on Lake Delhi earlier this month.

Twenty-three-year-old Alex Salow of Delhi died when a vehicle went through the ice on the lake on the night of January 7th. Delaware County Sheriff’s deputies now accuse 36-year-old Joshua Juengel of Manchester of being the driver of the SUV.

Juengel claimed he had gotten out of the vehicle “long before” it went through the ice, but investigators say evidence from the SUV and statements from witnesses indicate he was behind the wheel, and fled the scene after it plunged through the ice.

In addition to vehicular homicide, Juengel is charged with reckless driving, making a false report, and leaving the scene of an accident. Juengel is being held at the Delaware County Jail on a $50,000 bond.