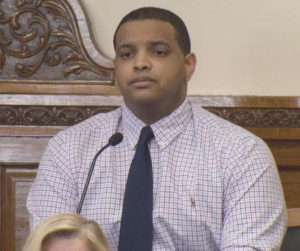 A Dubuque man is facing 50 years in prison after being found guilty in the stabbing death of his girlfriend.

A Dubuque County jury on Monday convicted 25-year-old Fontae Buelow of second-degree murder in the death of 21-year-old Samantha Link of Peosta. The decision followed roughly 12 hours of deliberations over two days.

Police charged Buelow with first-degree murder claiming he stabbed Link twice after a night out drinking on March 31, 2017. Buelow, who was also convicted of possession of cocaine, took the stand last week and claimed Link stabbed herself after they got into an argument.

A sentencing date for Buelow has not been set, but second-degree murder is punishable by 50 years in prison. It would be 35 years before Buelow would be eligible for parole.