You are here: Home / News / Number of recyclable cans and bottles going to the landfill has increased 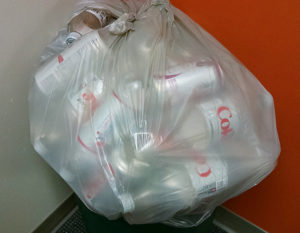 A deeper look at a state report on waste in Iowa landfills finds many thousands of the cans and bottles thrown away could’ve been returned to the store for a deposit or recycled.

Alex Moon, the Land Quality Bureau Chief for the Iowa Department of Natural Resources, says 86 percent of drink containers were being recovered in 2007. Now, that figure is down to 71 percent. Moon says for some people, 5 cents per can isn’t worth the hassle.

“A nickel today versus ten years ago, it could be that it’s just not enough to entice people to want to sort out and separate their cans and stand in a line at a grocery store and feed them into a machine,” Moon says. “The incentive might not be there.”

Convenience is another factor, as it’s gotten steadily more difficult for Iowans to find places to redeem their cans and bottles. “Ten years ago, we had roughly 300 different redemption locations where you could take them back,” Moon says. “Redemption centers. These are businesses that are set up solely to take back containers so you don’t have to bring them in to grocery stores, gas stations and convenience stores. We’re now down to about 100 of those.”

Redemption centers get a one-cent handling fee for each can or bottle they process, the same rate they’ve gotten since the “Bottle Bill” was launched in 1979. Moon says that’s likely the reason so many of the centers have vanished. He says the research shows larger quantities of aluminum, plastic and glass are not being recycled, but just thrown out.

“When you look at aluminum, we’ve almost quadrupled,” Moon says. “It was just a tenth of a percent of the total waste stream in 2006, now it’s 4/10 of a percent. With plastic, it was 15/100 of a percent. That’s doubled. Now, it’s 37/100.” More glass is also being chucked in the trash, ending up in landfills instead of being recycled. Glass in the waste stream has quadrupled, from 2/10 of a percent to 8/10. Many Iowans are simply opting to throw their beverage containers in their recycle bins or trash cans instead of taking them to the store for the nickel deposit.

“One of the things you see is single-stream recycling in larger communities,” Moon says. “Instead of taking the cans back, people are recycling them or just putting them in their container because of the convenience. It’s just showing a shift, potentially, in how we recycle things.”

The DNR does a Waste Characterization Study every five years to determine what types of solid waste are being dumped in the landfills. Moon says the recovery rate can be figured using data from the study and beverage sales. The study which was released in December, also found that food waste thrown away had nearly doubled from the last study in 2011.