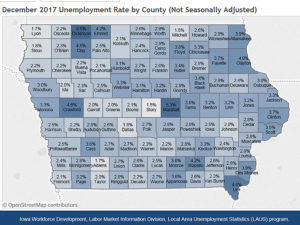 The state unemployment level dropped to 2.8% in December from the 2.9% recorded in November.

Iowa Workforce Development spokesman Cory Kelly says it has been some time since the level was this low.”This is the first time we’ve been at 2.8 in 17 years,” Kelly says. The unemployment rate was 3.5% one year ago in December.

Worforce Development figures show the number of unemployed Iowans dropped to 47,000.”Not since 1999 have we had this few Iowans on our unemployment rolls, so that too is a notable figure,” according to Kelly. He says with unemployment this low, employers can have a hard time finding qualified workers.

“The job market is getting tougher, we need more skilled labor and we need to focus on helping those Iowans with barriers to work through them and get into opportunities that will provide them the capacity to support those skilled labor needs across the state,” Kelly says.

“Annually, the state of Iowa has gained 28,300 jobs. Manufacturing leads the way in jobs added with 11,700 jobs over the last twelve months. Growth for this sector began in May with 12,400 jobs being added over the past eight months,” he explains. Construction was one of the areas that lost jobs in December.

“Down 1,300, professional and business services were down 500 and other services down 400,” Kelly says. Kelly says the construction industry lost 7,500 jobs in the last year after what was a record year in 2016 for the industry. Iowa’s unemployment rate remains well below the U.S. rate, which stayed at 4.1% in December for the third straight month.