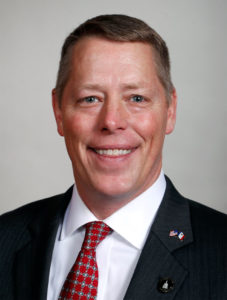 The Iowa House has sent the governor a bill that will provide an estimated $286 million over the next 12 years for projects designed to improve water quality. The bill got the support of nearly all Republicans and four Democrats in the House.

The vote is the partial resolution of a three-year-long debate among state policymakers seeking a consistent source of money to clean up Iowa lakes and waterways and improve city water treatment facilities. Republican Representative John Wills of Spirit Lake has worked as a water quality coordinator in the Great Lakes region for two decades.

“I think this is a good bill. It’s a good, long-term, sustainable funding source for water quality, something that we have not had in the state Iowa,” Wills told reporters before the debate began. “It’s something that, in the absence of anything else, is an awesome step up and it’s the beginning conversation of future conversations.”

Governor Reynolds is expected to sign the bill — the first piece of legislation she’s signed into law as governor. Next year, because of this bill, the state will spend about $4 million more on water quality projects. Critics say that’s not enough and there’s not enough accountability in the legislation to ensure the projects financed are leading to improved water quality. Representative Chip Baltimore of Boone was among the four Republicans who voted no.

“I don’t know about all of you, but I did not come down here to check a box,” Baltimore said, “and just because the words ‘water quality’ are in the title of a bill does not make me proud to vote for it so that I can put it on a postcard when I go campaign.”

“We have more than 700 waterways that are polluted in this state. What will this bill do to turn that around? No one know,” Staed said. “This is a trickle in the bucket — a trickle.”

Wills, the Republican who guided the bill through the House today, said there’s already a bill draft addressing those issues.

The water quality plan approved today by the House immediately uses metered water fees and eventually will use gambling taxes currently now being used to pay off state bonds.

The Republicans who voted against the measure were Baltimore, Mary Ann Hanusa of Council Bluffs, Jake Highfill of Johnston and Guy Vander Linden of Oskaloosa.  The Democrats in the House who voted for it were Bruce Bearinger of Oelwein, Helen Miller of Fort Dodge, Scott Ourth of Ackworth and Todd Prichard of Charles City.